In the early 1970s the school became a co-educational comprehensive school and was renamed Orange Hill High School. As the school grew the building in Colindale was too small, so the school was divided into a Junior and Senior school on two separate sites. The Senior School remained on the Colindale site and the Junior School was established on a new site in Hamonde Close some 2.25 miles away in the Broadfield Estate area; each school had its own Headteacher. By the early 1980s the two Headteachers were the formidable Marjorie Fenner at Orange Hill Junior School and the erudite Derek Culley at the Orange Hill Senior School.

The Senior school had no sports fields but the Junior school had extensive grounds on the Hamonde Close site which could be used for sports. However, Barnet Council had plans to develop the Broadfields area fields with more housing and proposed merging the Orange Hill Schools with Moat Mount School. The PTA of Orange Hill School initially opposed the proposal, but after securing a promise that the new, merged, school would have Derek Culley as the new Headteacher and the existing staff of Orange Hill, the PTA dropped its opposition and the merger took place in September 1984. Initially the school was called Moat Mount and Orange Hill School, but at a meeting of the Governing Body of the new school on 15th November 1984, with Councillor Dot Benson as Chair of Governors and three parents from the PTA as co-opted governors, it was decided that the name of the new school would be changed to Mill Hill County High School with Derek Culley as the Head. 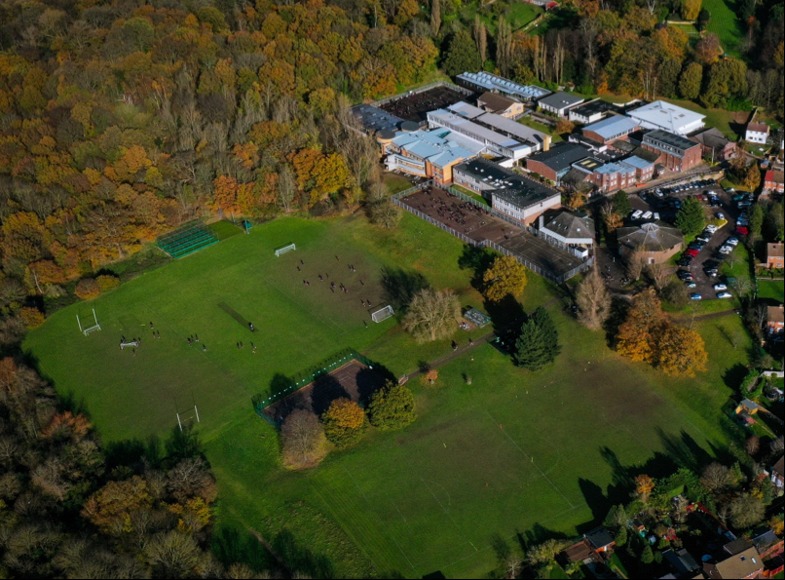 The new school, Mill Hill County High School, inherited the ethos of the former Orange Hill County High Schools and has gone from strength to strength; in 1994 the school was awarded the prestigious status of Technology College which was reaffirmed in 1997. That year Derek Culley retired and Dr Alan Davison was appointed as the new Headteacher.

In 1999 MHCHS benefitted from an investment of well over £1m for 4 new science laboratories and a suite of art rooms. In January 2003 OFSTED inspected the school and in its report wrote “Mill Hill County High School is an excellent school that has many outstanding qualities”. Dr Davison left the school in July 2003 to become a National Leader of Education in which he helped to support schools out of special measures, and to be an Education Adviser at the Department for Education.

So it was that in 2003 Geoffrey Thompson, former Head of Duchess's County High School in Alnwick Northumberland, became the Headteacher at Mill Hill County High School. Geoffrey transformed an already strong Music Department, including partnership work with the Royal Philharmonic Orchestra, so that the OFSTED inspection in September 2016 noted that in MHCHS the “Provision in music and dance is particularly strong”. MHCHS, already a good school, continued to develop. In 2012 the OFSTED Report of that year stated “Students’ behaviour is outstanding ... reflecting their outstanding spiritual, moral, social and cultural development”.

In 2007 the school was awarded the status of Languages College in addition to its status as a Technology College.

Following the retirement of Geoffrey Thompson in 2019, Andy Stainton was appointed as Headteacher who almost immediately had to lead MHCHS through the challenges of the Covid-19 pandemic which the school has weathered well.

The school is now embarking on its next phase, building on its successful past with a team of excellent staff, committed governors, supportive parents and, most importantly, impressive young adults who embody the school values of Aiming Higher, Promoting Harmony and Achieving Excellence.